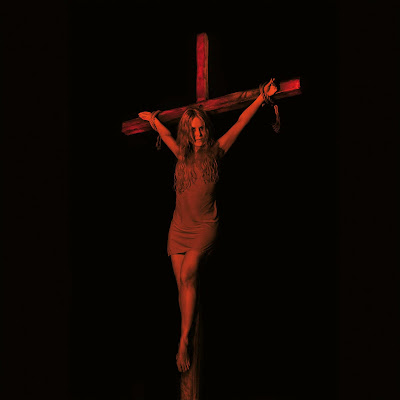 The Swedish/German heavy rock band LUCIFER is back with their fourth release "Lucifer IV".

This Stockholm based rockers have a CV that you don't fool around with. LUCIFER featuring of members of ENTOMBED, THE HELLACOPTERS, DEAD LORD, VOJD, TOPPLOCK and THE OATH.

"Lucifer IV" contines on the path with their heavy 70s hard rock sound with an occult doomish vibe. Since thier first release "Lucifer I" (2015) they have improved themself on every release and I see that is something that they continue to do. As the new album is a delightful one, the evilness is perfectly used and the vocals from Johanna Sadonis is just stunning with her powerful and calm voice which almost bewitches one. 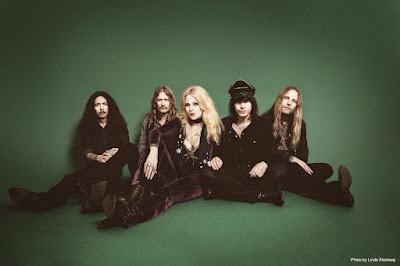 The album starts with "Archangel Of Death", SABBATH-infused rock with a gothic vibe. Excellent guitar playing from Linus Björklund and Martin Nordin, clear and dirty bassline by Harald Göthblad, marvelous vocals Johanna Sadonis, hard-hitting drums by Nicke Andersson a tune that showcase the sound that we have gotten served lately by LUCIFER. The great "Wild Hearses" with some impressive vocals, fuzzy guitar, and marvelous rhythm section. There are a few really accessible and radio-friendly tunes with a great groove with a lot of catchiness, like the songs "Crucifix (I Burn For You)" and "Cold As A Tombstone". "Mausoleum" and "Nightmare" are two great tracks with a gothic vibe where songs like "Bring Me His Head" and "Orion" flirts with BLUE ÖYSTER CULT. The album ends smoothly with “Phobos” and puts an end to this exciting album. Highly recommend this record. 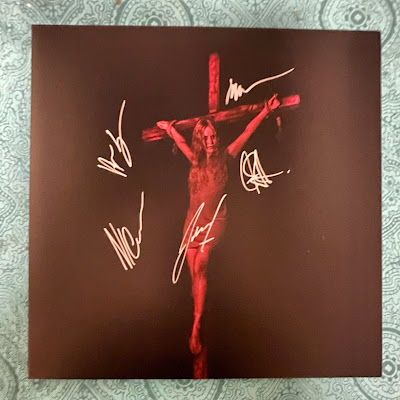 I did visit one of the best record stores here in Stockholm this Friday to pick up the new album with LUCIFER, the band was there and was so kind to sign my copy with the Amazing artwork of singer Johanna Sadonis, soaked in red and tied to a crucifix. "Lucifer IV" was released on Halloween 2021 (October 29th, 2021) on Century Media Records/Sony Music.

Sum: "Lucifer IV" is a well-rounded trip back to the peak of heavy rock in the '70s. 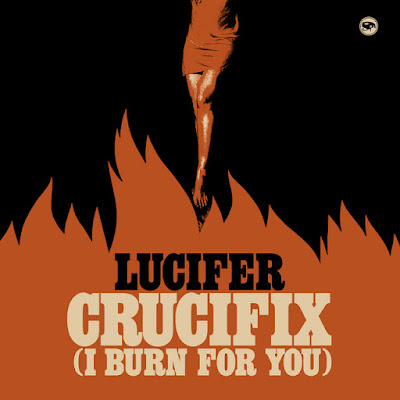 Today's tune "Crucifix (I Burn For You)", taken from "Lucifer IV", enjoy!

Listen to ”Lucifer - Crucifix (I Burn For You)" on Spotify!

Email ThisBlogThis!Share to TwitterShare to FacebookShare to Pinterest
Etiketter: Crucifix (I Burn For You), German, Heavy Rock, Lucifer, Lucifer IV, Record of the Week, Review, Swedish