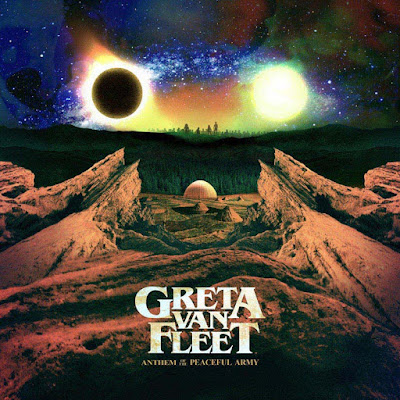 "Anthem of the Peaceful Army" is the debut studio album by American rock band GRETA VAN FLEET. The album was released on October 19, 2018, recorded at Blackbird Studios, Nashville, Tennessee and follows the band's original two EP releases, "Black Smoke Rising" and "From the Fires".

The two first EPs has been spinning a lot in my home, work, car, I do like what I hear. That the band have a big influence from LED ZEPPELIN can be heard on every single tune, bit's and pieces here and there, vocals, solos, clothes, lyrics that they almost would be a carbon copy of ZEPPELIN, but with their own way of doing it and with the new album "Anthem of the Peaceful Army", they begun to shift away from LED ZEPPELIN. Although this sounds a lot of ZEPPELIN, so be it. Some may think they've crossed the border, creating songs on ZEPPELIN, so be it. The fact that ZEPPELIN borrowed a lot from old heroes, even if things were snitched right of the table to create something to their own, that was ok, then this should also be ok as well. As I have ZEPPELIN as my musical-gods, I think it's with great fun when others try to create the same feeling they had even if it sounds similar, there are many examples of bands that have borrowed the sound of ZEPPELIN. 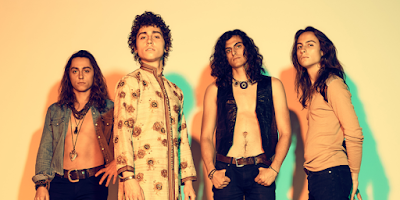 "Anthem of the Peaceful Army" is an Absolutely superb album! The album has many great tunes from the beautiful and grand half paced opener "Age Of Man", followed by the rocker "The Cold Wind" and the uptempo single "When The Curtain Falls". "Watching Over", have a classic hard rock touch, slow with tasty guitar licks. "Lover, Leaver" is another uptempo piece with a great feeling to the past to the more acoustic guitars driven tunes "You're The One" and "The New Day", the first one with a country feeling and the second with a blues one. More blues rock in "Mountain Of The Sun", with catchy guitar licks and powerful vocals to a more darker turn in "Brave New World", mournful guitars riffs and grievous vocals. The album closes "Anthem", a loveful ballad that touches your soul. That fantastic vocal, great guitar playing, tight rhythm section and the ZEPPELIN vide carry this album by these youngsters that overall kicking the mainstream ass with a pure rock album. 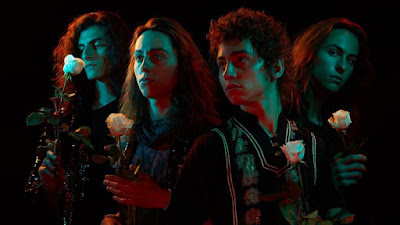 Sum: A Peaceful Army is a classic rocker that you shouldn't miss!