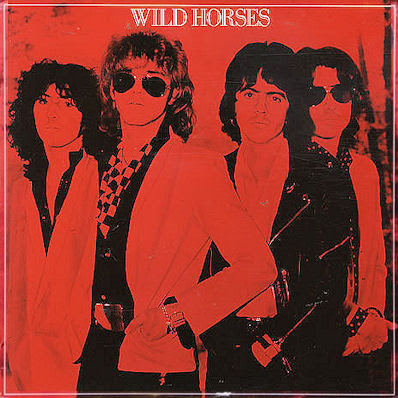 Today's tune "Reservation" by the British rock band WILD HORSES, taken from the self-titled debut album, co-produced with Trevor Rabin at Konk Studios in London, and released on 14 April 1980 on EMI Records.

It was subsequently issued on CD in Japan in 1993 on Toshiba-EMI, and by the now defunct UK labels Zoom Club in 1999 and Krescendo Records in 2009, respectively, both with the title The First Album. The most recent re-issue came in February 2013, courtesy of UK-based Rock Candy Records, and includes a host of unreleased studios demos as bonus tracks not found on previous re-issues.

The video clip with WILD HORSES perfoming live the 1st song from their debut (and self-titled) album on the TV show All Right Now (remember a song from Free?)

The show was hosted by Phil Lynott (SKID ROW, THIN LIZZY, GRAND SLAM, THE ROCKERS) and also featured RockPile. On the end of the show Phil played the classic THIN LIZZY song Rosalie with the boys in the band. 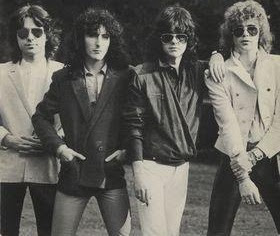 Jimmy Bain (R.I.P.) comes from RITCHIE BLACKMOREs RAINBOW, band which he recorded Rainbow Raising (1976) and Rainbow On Stage (1978). After WILD HORSES, he would re-group with his long time friend Ronnie Jamed Dio (R.I.P.) on the band DIO.

Brian Robertson started playing with THIN LIZZY on the record NightLife (1974) and stayed on the band until Live And Dangerous (1978). After WILD HORSES, was on MOTÖRHEAD for the album Another Perfect Day 1983 and then with the scotch singer Frankie Miller.

Niel Carter left WILD HORSES to enter UFO in 1981 (The Wild, The Willing and The Innocent). After the record Making Contact he started playing with Gary Moore and stayed with Gary until 1989 (After the War).

The Band WILD HORSES released the record called "The First Album" in 1980 (it was recorded in 1979).

For the second release "Stand Your Ground", 1981, John Lockton (VICTORY) replaced Carter. Then Brian Robertson left the band and was replaced for Laurence Archer (GRAND SLAM, STAMPED and UFO).

By the final days of the band Frank Noon (DEF LEPPARD, Pete Ways's Waysted) was playing the drums on the band...

Jimmy Bain died while on DEF LEPPARDs "Hysteria on the High Seas" cruise. He was performing on the cruise with the group LAST IN LINE. No official cause of death is known at this time, but band members informed fans on the cruise that he had been battling pneumonia for some time.

Here is a bonus clip with LAST IN LINE performing "Invisible". Filmed four days before The Great Jimmy Bain passed away. Live at The Magic City Casino in Miami Florida on January 20, 2016