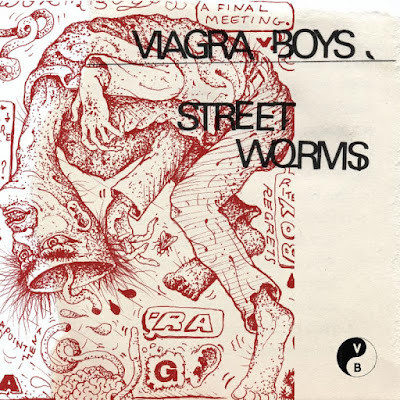 "Street Worms" is the debut album by the Swedish and Stockholm based garage punk band with uncontrolled horns. V**GRA BOYS (or V**gra Boys, as they’re referred to in spam filter-evading emails) have an anthem for that. "Street Worms" was released on Sept. 28 via YEAR0001.

"Street Worms" is a twisted jazzy post-punk story about worms, sports and sneaky things in the basement, makes the album a really fun ride, an album about illusions of realness, the absurdum of existence and the joke on humanity, where the music is like a matchmaker between NINE INCH NAILS with Iggy Pop behind the microphone and the electronic synth-poppers DEVO with SPARKS sprinkles on the top.

The album opens up with a sneaky husband that got fetish about latex thrills in "Down in the Basement", pulsing rhythms, horns and a finger pointing singer that demands the cheating husband to give his wife apology for his shabby way and grow into a real man. "Sports", is an absurd and hilarious parody a particularly American brand of masculinity. The tune is about "Sports" and different types of balls: Baseballs, Basketballs, Volleyballs Ping pong, Beachballs, and Wienerdogs all bounce around the song, emphasized with a relish bubble, a low pitched voice out of frontman Sebastian Murphy. Meanwhile, a mid-pace drum beat and a meaty bassline hold things in order along with a sexy guitar riff. "Best in Show" is a reference about dogs where Murphy barks out and then he gives the dog a snack in the guitar-driven tune "Shrimp Shack". The dark new wave of "Just Like You",  a thick and fat fuzzed bassline and monotone electronic sounds surrounds the vocals to a hypnotic journey about a dream. Guitars, saxophone, and electronic blips are the main things in "Slow Learner" and manic noises and guitar blops in "Frogstrap", both tunes follow the same path in tune building, both with excellent vocals by Murphy and terrific playing by Benke, Benis, Tor, Oskar, and Konie. "Worms" is a half pace tune about worms that will eat you. Great flow with squirming vocals. The album closes with "Amphetanarchy", an instrumental piece with a wonderfully tangled groove, strangled saxophones, jamming drums, true freeform art.


Sum:  Who can "Smoke a joint, eat some meat, scream the name of every single sport you can think of that includes a ball", well V**GRA BOYS. 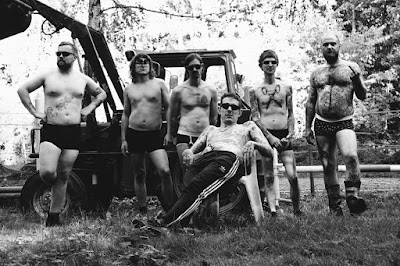 “It was all a dream, but it was so nice. I had a nice house and such a lovely wife. We had a little dog, such a little dog, it reminded me of a large dog. Just a miniature size. ”