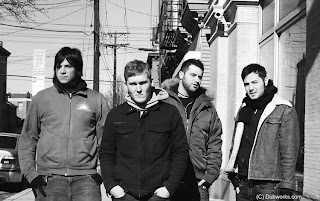 This American band visited Stockholm yesterday at Debaser Medis.
It was filled to overflowing.
The audience was quite lyrical,they sang in almost all the songs
the band did, quite fantastic to see how much they liked what they
saw and heard. The music was a bit of Indie like but with a harder,
rock almost to punk rock. 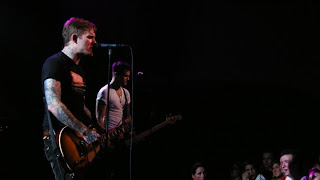 It wasent that much air in concert hall at the end, im suprised
that the crowd jumped and sang so much at the end.
Oups Just saw a bit of me in that pic, ah well.

His lyrics was quite cool and did have a lot of it and the crowd
remembered it all..quite amazing to see.
Its not my cup of tea but its was rocking. 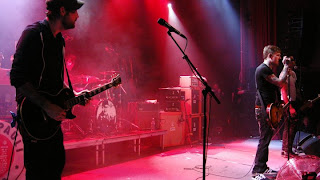 This band started up in 2005 in New Jersey.
The released 3 album,
the latest in 2010 its called American Slang. 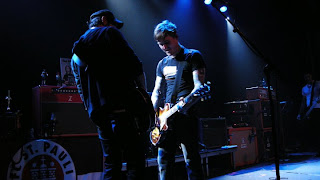 It looked like the had a thing for Totems or fancy small
animals that they had on their pa.
They even had a special box for them ;)

Ladys and Gents, The Gaslights Anthem.


Wanna know more pls look at http://gaslightanthem.com/
I want to thank Malin Björk for the pictures.

Listen to "The Gaslight Anthem - The Patient Ferris Wheel" on Spotify