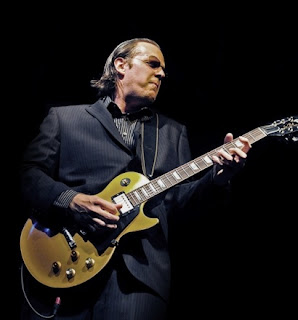 This is a wonderful combination, Joe Bonamassa and Steve Lukather.

Joe Bonamassa received his first guitar from his
father at the age of 4, and by age 7 he was
playing Stevie Ray Vaughan tunes note for note.

At the age of 11, during a short period of being
mentored by Danny Gatton, he learned such styles
as country and jazz as well as heavy rock
He first opened for B. B. King at 12 years of age.
After first hearing him play, King said,
“This kid's potential is unbelievable.
He hasn't even begun to scratch the surface.
He's one of a kind.”
At 14, he was invited to attend a
Fender guitar event; during that trip
to the West Coast he met Berry Oakley,
Jr. Bonamassa and Berry founded the group Bloodline
with Miles Davis's son Erin and Robby Krieger's son Waylon

Ive seen Joe Bonamassa 2 times here in Stockholm,
and he got a feeling for blues that is very rare.

And Steve is an old Toto member and has been involved
with arranging, composing, and recording on over 1,000 albums.
Steve also has been nominated for 12 Grammy awards,
and has won five times, now thats something!
The keyboardist David Paich and session drummer Jeff Porcaro
were high school friends with Lukather.
They asked Lukather to join in forming their band, Toto,
in 1976 when Lukather was nineteen years old.
He was a member of Toto from that time until the band split up in 2008 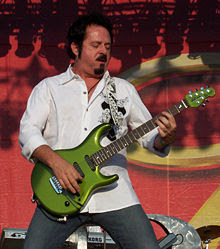 Didnt have the chance to see him or Toto although i really like them.
But u never know im sure he will come to Sweden again.

Thats a bit about them, Let us listen and look to this great video.

Email ThisBlogThis!Share to TwitterShare to FacebookShare to Pinterest
Etiketter: Blues