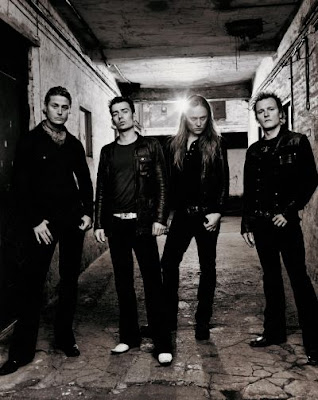 D-A-D is a Danish rock band previously known as Disneyland After Dark, a name that had to be changed after a threatening lawsuit from The Walt Disney Company. Their style of music is often categorized as melodic heavy rock. They have also used the names D.A.D., D•A•D and D:A:D, each name represents a period in the band's history.

Today D-A-D had a gig @ klubben/Stockholm, Sweden together with Ammotrack (More with them in a few days)
D-A-D are a bunch of nice guys and the crew was the same so i would say that i really enjoyed working with them.
So why not kick out the new title track from the 10th studio album from one of Denmarks most popular and persistent rock bands. that is also the name off the tour they are doing, Monster Philosophy.
Tomorrow i will give you a classic with some nice shots that i was able to get, haven't gone thru them yet.