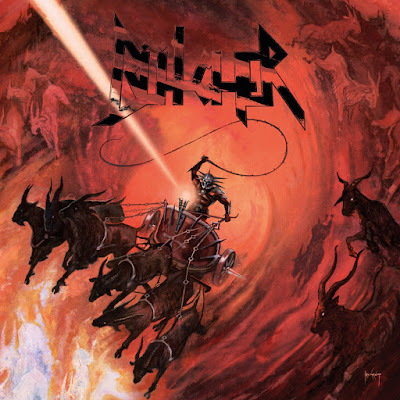 The quartet was formed in 2002 in Antwerp, Belgium. They’ve debuted in 2017 with "Bestial Fükkin' Warmachine", their second album "666 Goats Carry My Chariot" was released by the iconic extreme Metal label Osmose Productions on January 31st, 2020.

When looking at the cover of the album "666 Goats Carry My Chariot", somehow you get a flashback of the Metal albums that was released back in the days, thinking of the '80s and the '90s when bands had both names similar and covers like this, and hey you are guessing right, this is retro, as you can hear both JUDAS PRIEST, VEKTOR, KING DIAMOND, EXCITER and VENOM among many others.

"666 Goats Carry My Chariot" is well played and very fun to listen to, you will get a magnificent journey from the opening intro "Inauguration Of Steele" to the outro "Exaltation Of Sulphur" with the same short length of 1,15. In between, we get seven thunderous tunes like "45 RPM Metal" and "Viking Funeral". Groovy and epic title tune that goes off like a mid-pace piece until it blows to the mayhem of furious metal. Thrashy and punkish tune "Sentinels Of Dethe" to the full of catchy speedy heavy metal in "Iron Bitch" or speedy thrash with an evil attitude like "Metallström/Face The Bütcher" and blackened evil thrasher "Brazen Serpent", lyrics with a twinkle in the eye that give you a big smile. Very easy to headbang to or trow your fist in the air. An excellent album to light up a dark and boring day. Highly recommended.

Sum: Get your denim jacket and let 666 Goats Carry My Chariot back on track again for satanic speed metal. 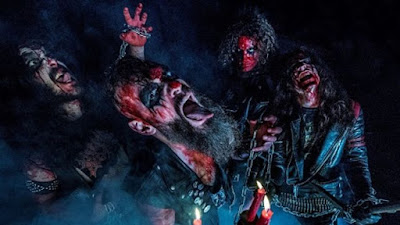