Monday, a new week and the hottest day so far here in Sweden. So with a sweaty face, it's time to present "Record Of The Week". With this, we are a bit patriotic and lift up a Swedish release.

Since both the mood and the craving for the slightly harder kind of music and an album that has had a lot of playing time lately is "The Funeral Pyre".  I suspect it will be a hard and sweaty week to look forward to.

"The Funeral Pyre" is the melodic black speed metal debut album of the solo project KVAEN, which consists of Swedish musician Jakob Björnfot (AUTUMN DEATH, THE DUSKFALL). The album features a lot of class session musicians such as Sebastian Ramstedt (NECROPHOBIC, ex-NIFELHEIM), Perra Karlsson (DREADFUL FATE, IN AETERNUM, ex-DESTRÖYER 666) and Danni Jelsgaard (ex-SVARTSOT), so buckle up and enjoy the ride. 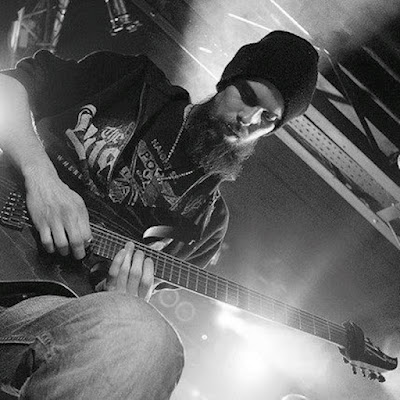 KVAEN debut is a real beauty, an album that lies between acts like PRIMORIAL, VECTOR, TRIBULATION, and DISSECTION, a melodic mix of black metal and 80's speed metal. It is with great pleasure to press play. Unfortunately only digital and CD, for now, Vinyl will arrive at the end of June, which I look forward to with great joy.

"The Funeral Pyre" has eight marvelous tunes that spin between the four minutes mark up to just over six minutes with a total playtime of forty-five minutes, the perfect duration to make an impact and leave, whilst leaving the listener wanting more. "Revenge By Fire" opens up the album like a well-oiled chain saw, brutal, aggressive, and energetic, full packed with blood thinning. Thunderous drumming and fast picking riffs and a gruff half screaming vocals that lay a perfect layer into the melodic speedy Gonzalez. The tune is followed by another masterpiece that is born from the same mother as the previous track, an aggressive speedy thing named "Yee Naaldlooshii", (see the video below), melodic beauty that could be a tribute to Nödtveidt's DISSECTION. The album continues with the same excellent execution and craftsmanship, he nails it from beginning to end with utter brilliance. The title tune "The Funeral Pyre" is a good example or the epic "Septem Peccata Mortalia" with its blistering riffs, smashing drums, and the hypnotic melody, a guitar solo that winding itself like a deadly grinding knot. The bombastic "The Wolves Throne" and the midtempo blackish funeral tune "As We Serve The Masters Plan". "Bestial Winter" is a progressive speedy thing that is blackened with Indian Ink, it has some really impressive guitar work, well-hit drum notes and a vocal that is so aggressive that it almost hurts, the melody gleams just as fine as gold on the seabed. To the album closer of the instrumental relaxing beauty "Hymn To Kvaenland" to cool you down a bit before you start it over again. It’s a marvelous debut that would have gotten full pott if points were given, one of the best albums of 2020 so far, make sure to get it.

Sum: I bow and thank you so much for an unbelievably good album.