Exodus - Blood In, Blood Out 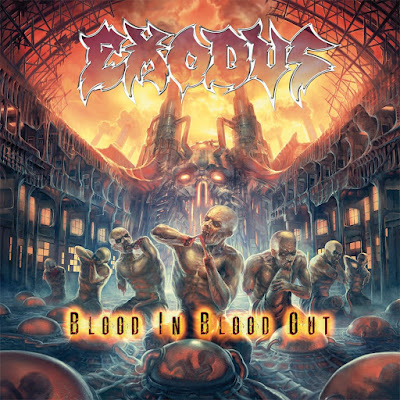 2020 is set to be an unforgettable year for British and European thrash metal-heads – three legendary pioneers of the genre have announced that they will be touring throughout next spring. Hitting the road will be no other than the Bay Area’s very own TESTAMENT, EXODUS and DEATH ANGEL – who have all teamed up to bring the catchily dubbed ‘The Bay Strikes Back‘ tour to our shores!

The tour started yesterday in Copenhagen and will go thru Stockholm, Sweden this evening and end in Hannover, Germany on the 11th of Mars, see the rest of the tour below.

Yesterday we had TESTAMENT and today we put focus on EXODUS, guess what we will have for tomorrow?? 😁 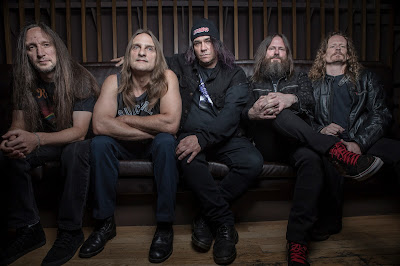 “It’s finally happening!!!! All of us have spoken over the years of how killer it would be to tour together and bring Bay Area Thrash Metal across the world and we are starting in Europe. I’m sure I can speak for all three bands in saying that we are proud of where we all came from and we are still delivering some of the best thrash metal we can to the fans. Be ready for the Bay Area Strikes Back Tour 2020.”

And Gary Holt from EXODUS:

“I am fired up to FINALLY return to Europe with Exodus! Along with our Bay Area friendsTestament and Death Angel! An epic tour for the ages! Looking forward to crushing everyone Bay Area style! See you there!!! I cannot wait!”

“We couldn’t be more excited to announce our upcoming tour with Testament andExodus! Bay Area Thrash Attack in full force! All three bands have been close friends for decades and our mutual respect is of the highest level. That said, we will surely push each other to go beyond expectations each and every night. This is a first – the three of us have never toured together in the same package… it’s about time! See you in the pit!”

Both TESTAMENT and EXODUS are currently working on the follow-up to their 2016 (TESTAMENT – "Brotherhood Of The Snake") and 2014 (EXODUS – "Blood In, Blood Out") albums, while DEATH ANGEL will be touring in support of their most recent record, 2019’s "Humanicide".

EXODUS is an American thrash metal band formed in 1979 in Richmond, California. They have gone through numerous lineup changes, two extended hiatuses, and the deaths of two former band members. Their current lineup consists of guitarists Gary Holt and Lee Altus, bassist Jack Gibson, drummer Tom Hunting, and lead vocalist Steve "Zetro" Souza. Hunting is one of the original members, and departed from EXODUS twice, in 1989 and 2004, but rejoined in 2007. Holt joined the band about two years after its formation and is the only member of EXODUS to appear on all their releases.

The band is currently writing a follow-up album, tentatively due for release in 2020.

Today's tune "Blood In, Blood Out" is the title track from the tenth studio album by American thrash metal band EXODUS. It was released on October 14, 2014 through Nuclear Blast, and is the band's first album with vocalist Steve "Zetro" Souza since 2004's "Tempo Of The Damned". The album also saw a reunion with original guitarist Kirk Hammett, who plays the guitar solo on "Salt the Wound". "Blood In, Blood Out" received generally favorable critical reviews, and it entered the Billboard 200 at number 38—the band's highest U.S. chart position to date. EXODUS promoted the album with its first concert tour with Souza since he left the band in 2004, due to a feud with guitarist Gary Holt. 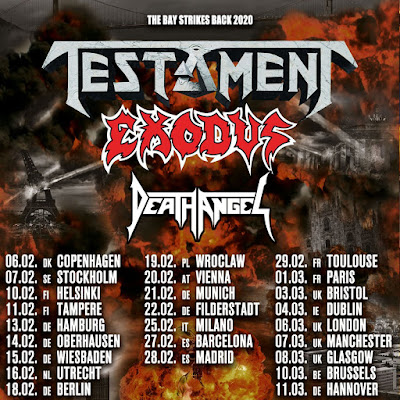 Here are all the dates again:
THE BAY STRIKES BACK TOUR 2020
TESTAMENT | EXODUS | DEATH ANGEL

Listen to ”Exodus - Blood In, Blood Out" on Spotify!