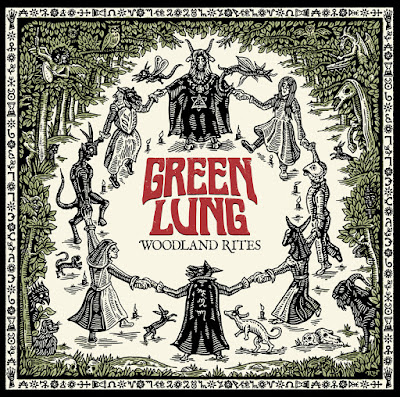 "Woodland Rites" is the debut album by the South London-based heavy rock quintet GREEN LUNG. The band captured my attention when the band got signed to the cult label Kozmik Artifactz.

GREEN LUNG sound harks back to the golden days of psychedelic rock, injecting those classic sounds with occult venom and punk energy. "Woodland Rites" gives an instantly appealing journey with excellent groove and hooks. The eight tune album clocks in at the decent 42 mins line, which, in this case, feels just perfect.

"Woodland Rites" is an excellent album, from the opening intro "Initiation" to the last tune "Into The Wild" of instantly addicting tunes. The title tune "Woodland Rites" is a crushing guitar riff-laden piece with large hooks and a catchy chorus with some echos of BLACK SABBATH, even Tom Templar vocals partly sounds like a modern OZZY. "Let The Devil In" is a groovy tune with a great charm. An excellent guitar solo and a beautiful organ boost the tune. "The Ritual Tree" opens up with an organ and a choir of hymns along with the priest that summoning the Ritual Tree, groovy guitars and bass, amazing vocals. The middle part includes a marvelous solo that makes this tune a blessing to listen to. The devil worshippers open up the death cult in the doomy tune "Templar Dawn", a with rising a grieving guitars caress the occult in a completely magical way. The witches in the upbeat tune "Call Of The Coven", summoning the darkness. The half pace fabulous tune "May Queen" shows the band in another view, a more stripped-down and clean approach where the beauty of their creativity may emerge as a flower in the spring. The vocals are is soulful, the bass and drums softly play, the guitar is fresh and neet. The album closes up with "Into The Wild", where they return to the woods of riffs by a wilding but keeps the slower groove and soulful vocals and harmonies. "Woodland Rites" is an excellent debut album with great musicianship and intelligent lyrics.

"Woodland Rites" was recorded and mixed by Wayne Adams (VODUN, GHOLD) who reprised his Free The Witch duties at Bear Bites Horse Studios. Mastering was undertaken by Brad Boatright at Audiosiege. "Woodland Rites" will be packaged in hallucinatory artwork by renowned woodcut artist, Richard Wells (THE WICKER MAN, DOCTOR WHO). 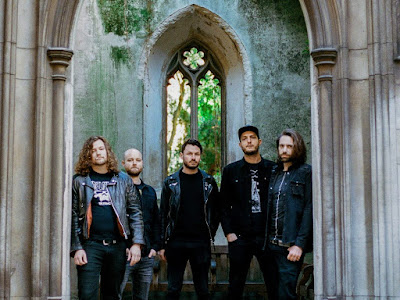 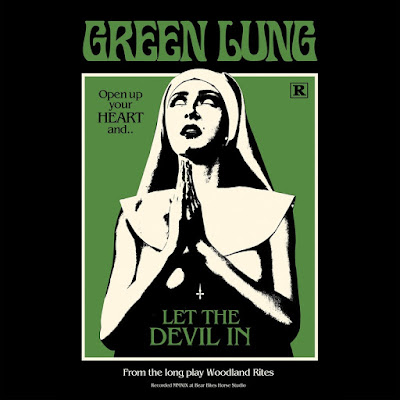 Today's tune "Let the Devil In" is the first single released from the album "Woodland Rites", released on March 20th, enjoy!

Listen to ”Green Lung - Let The Devil In" on Spotify!