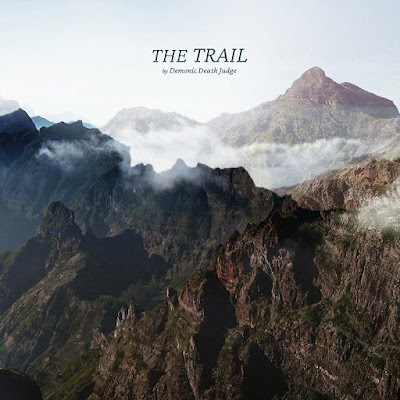 Monday and it's time to present "Record Of The Week".

Finland's prime sludge/stoner doom band DEMONIC DEATH JUDGE is back with their fifth album "The Trail". The band is originating from Kymenlaakso, Finland. Formed by two sets of brothers in 2009. The lineup would change in 2013 and remain the same since.

"The Trail" was recorded during Fall 2019 all around southern Finland. Wildcard Andy appears courtesy of Old Wood'n Joe's Hobo Bluesstruction who provides additional instruments on the album. Cover art and photos by PÄIVI LUOMA. The album was released March 27, 2020 on Suicide Records.

"The Trail" is a veritable slab of the heavy sludge, nihilistic screaming misery with massive, doomy plodding riffs, atmospheric explorations, and a doze of psychedelic spices.

The album opens up with a tasty acoustic ghostly intro in "Cougar Charmer", a piece that could represent the photo of a mountain range on the album cover, a cover that easily could be taken as something totally different from what the band stands for. Anyway, after little over a minute when the acoustic guitar silence and the electric is turned on and the first tunes slide over to the bluesy "Filthy As Charged", heavy, almost stoner guitar riffs and the sludgy vocals in a very melodic and groovy tune that follows pretty much in the same way in "Hardship", "Elevation" and the tripped out "Shapeshifting Serpents" but with a few different approaches, still in very high quality and standard by the band until the band changes a bit and walks into a darker place in the tune "Flood", this piece also has a marvelous psychedelic guitar work that flows over to the tasty instrumental "Fountain Of Acid" who barely breathes before we step over to a reprise of "Cougar Charmer", acoustic guitar fiddle in a western-style and harmonica that reboots the sludgy doomish way, like ginger does in a sushi meal, opens your senses completely to be able to receive what's to come when it's time for the title tune "The Trail" to take place in this trip along with high mountains. Almost a nine minutes beast which crushes almost everything, thinking of compositions, jamming, and the way how to build a tune that you enjoy as a listener, touches everything and opens up the senses in a way that you lose yourself in it. The album closes up with the groovy, melodic, and bluesy "We Have To Kill". The album is a record that is designed to be appreciated multiple times and in a row, preferably on vinyl alone or with headphones.

Sum: An very enjoyable release from our neighbors and a must-have for stoner/sludge fans. 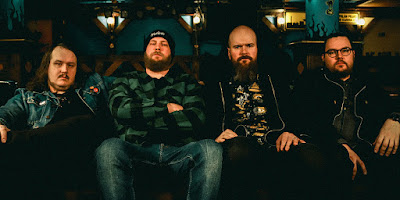 Today's tune "Filthy As Charged", taken from the album "The Trail", enjoy!

Listen to ”Demonic Death Judge - Filthy As Charged" on Spotify!