The Necromancers - Of Blood And Wine 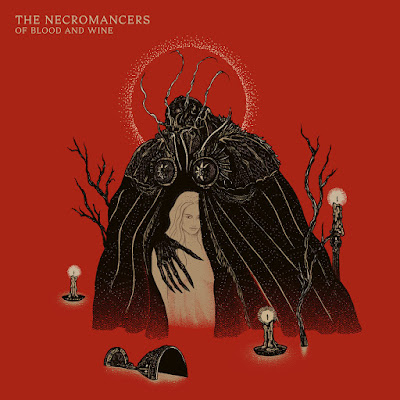 Monday, a new week and it's time to shake some life in the "Record of The Week".

"Of Blood And Wine" is the second full-length from the French melodic doom quartet THE NECROMANCERS.

The album is a six-track, 44-minute long buffet with mixed melodic doom and classic heavy metal from the past, garish and whiskey drenched vocals, galloping heavy riffage with a stench of the 70's hard rock, springled with SABBATH with a layer of NWOBHM.

The album opens up with a soundtrack guitar riff, first thoughts lands on an early Frankenstein, until the shape changes and "Join The Dead Ones" starts for real, the vocals, melody flirts with GHOST, until the chorus comes and the vocals gets turbid and wheezy, an occult doomish wibe lies over the track. The next tune "Erzebeth" is a 13-minute epic piece and really stands out, dual galloping riffs that throw us back in time, floats out like an octopussy and fingers a bit here and there, wonderful, a true beauty. The tunes have a pretty long playtime except for the title track, just under three minutes which spins low-melted through as an interlude. Halfway through the album, it's time for the catchy "Secular Lord", full of hormone-induced musicians that just bubbles of crazy but well-thought creations that end up in excellent tune. "Lust" is a half pace tune that flows nicely until it half burst out in the middle and shifts direction in the end. The album closes up with the epic chanting tune "The Gathering", where an occult sacrifice ceremony takes place in the backyard, a gloomy landscape opens up and you wonder where the hell you are, say hey to the devil, you have just been sold. To summarize the album its highly majestic release and a superb follow-up to "Servants Of The Salem Girl". 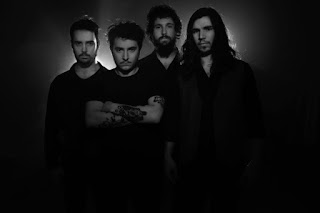 “Of Blood And Wine” was released on October 5th, 2018 via Ripple Music!

Today's tune "Secular Lord" is taken from "Of Blood And Wine", enjoy!

Listen to ”The Necromancers - Secular Lord" on Spotify!

Email ThisBlogThis!Share to TwitterShare to FacebookShare to Pinterest
Etiketter: Doom, French, Melodic, NWOBHM, Of Blood And Wine, Poitiers, Record of the Week, Ripple Music, The Necromancers