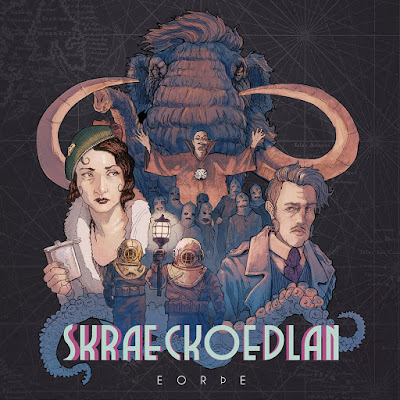 A new week is here and it's time to introduce "Record Of The Week".

"Eorþe" is the 3:rd released from the Swedish power trio SKRAECKOEDLAN. Ten years as a band has made its mark, they have grown and made themselves a name in the fuzzy stoner land. The new album "Eorþe" have a wonderful mix of fuzz, stoner, psychedelia, progressive rock and all in the native language "Swedish". Even if the basics in SKRAECKOEDLANs music comes from the past it sounds modern and fresh, with well-thought monstrous riffs and an amazing groove. If some references should be made I could say it's a mix between SOLID GROUND and KENT. Set in the 1920s, Earth is a mystery with Lovecraftian connotations, philosophically told through eight songs. The record is the telling of a story by sci-fi author Nils Håkansson, written specifically for SKRAECKOEDLAN to put into music. 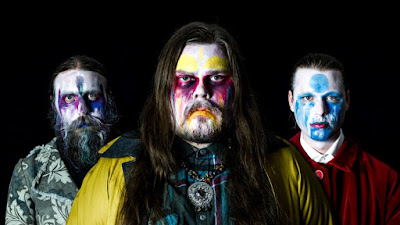 "Eorþe" opens up with a finger tapping intro that starts "Guldåldern", before the melodic melody with a neatly played guitar steps forward into the lights, a calm vocal performance by Robert Lamu, he sings about "the darkness that opens one last time", until he adds a higher gear to the tune, it builds up and it gets drained with distorted fuzz. Martin Larsson's pounding toms opens up the second tune and the first single "Kung Mammut" before he lets in the fuzzy tones from the guitarist Henrik Grüttner. Great science fiction atmosphere in the melody, a powerful tune with a really cool story, me like. The album continues with a melodic melody, powerful and glorious riffing, like the technically second single "Creature Of Doggerland", that serves with dual harmonies and have a heavier outfit than the previous tunes. In the same line follows "Angelica", that opens with a punching drum intro, that turns out to be a very heavy piece. "Mammutkungens Barn" opens up with a pretty cool intro with great bass licks, dual harmonies and a great melody. A home alone acoustic guitar intro in the "Elfenbenssalarna", before it's getting wipeout by the bass and guitar, distorted and monstrous, a psychedelic masterpiece that passes the ten minutes line, close your eyes and get lost in all the hallucinogenic tones the band creates, this is a totally stunning piece. "Tentakler & Betar" flows in the progressive vain, a great groove, twisted riffs. The album closes up with "Angra Mainyu", a beautiful piece with a lot of twists and changes, feels a bit trippy and far out. "Eorþe" is a spectacular mix with an interesting story that gives you a listener SKRAECKOEDLANs finest hour.

Sum: "Eorþe" is a must-have, even if you are a hardcore stoner freak or a fuzz-head, learn Swedish and you will gain even more. 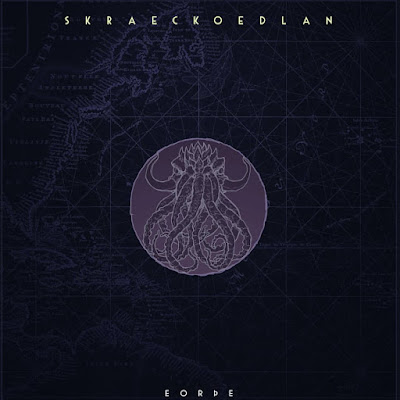 Today's tune "Elfenbenssalarna", "A prelude to the end. The moments of bliss before the imminent doom. We have journeyed to the place where it all unfolds, where the unseen rests and the secrets of the past lay buried. Here we too will become shrouded in mystery, riddles to be solved by those not yet granted a time and place in existence. Whatever the answers, one naked truth stands absolute. None shall leave the Ivory Halls."