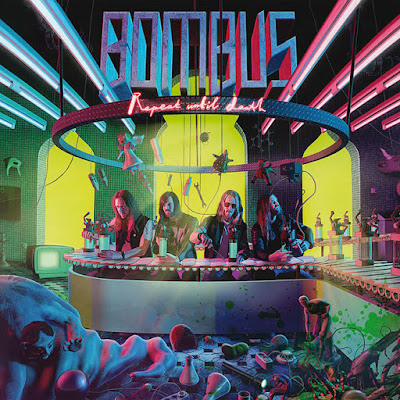 Monday, a new week, time to introduce "Record Of The Week"

"Repeat Until Death" is the latest release from Scandinavian heavy metal band BOMBUS.

A band that continues to impress with every release and once again they have developed and have little bit of a different approach than the band’s previous album "The Poet and The Parrot". It's harder and more catchy than before, right straggly but well conceived, incredibly well written album that still sounds BOMBUS. I take my hat off and say congratulations! Damn this is good, you've really shown what you can do and I am impressed, well done guys. 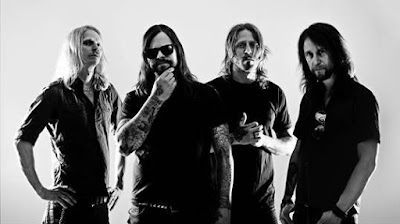 The album opens up with a real killer "Eyes on the Price" where the guys doesn't waste any time before you hear the engine on the mean machine screams when they step on the gas. The album continues to impress with the second tune "Rust" where the heavy slows down a inch and grabs you in the heart with the brilliant melodies and choruses so you can't sit still any longer, you have to sing along. And hey, it doesn't end here, the 3:rd tune "Deadweight" and the 4:th "Horde of Flies" have the same approach. It's until the 5:th tune "I Call You Over (Hairy Teeth, Pt II)" when the BOMBUS machine hits the break and really slows down. A tune that partly stands out from the typical BOMBUS sound. It's not bad at all, it's different and I like it :) it have a really catchy vocal harmony. The album kicks off again with the title track of the album. Hard hitting drums, heavy guitar riffs that keeps it shaking it down. "Shake Them for What They’re Worth" is a progressive stomper with that wonderfully BOMBUS mess. "You the Man" is a heavy piece with a rockish MASTODON feeling. The album ends with "Get Your Cuts", a grandiose rhythmic piece, where the sound is dark, pompous like MUSE.

An album that only have a playing time little over 30 minutes is an album that should be played on Repeat, Until Death!

Today's tune "Deadweight" is taken from the album "Repeat Until Death".

Listen to ”Bombus - Deadweight" on Spotify!